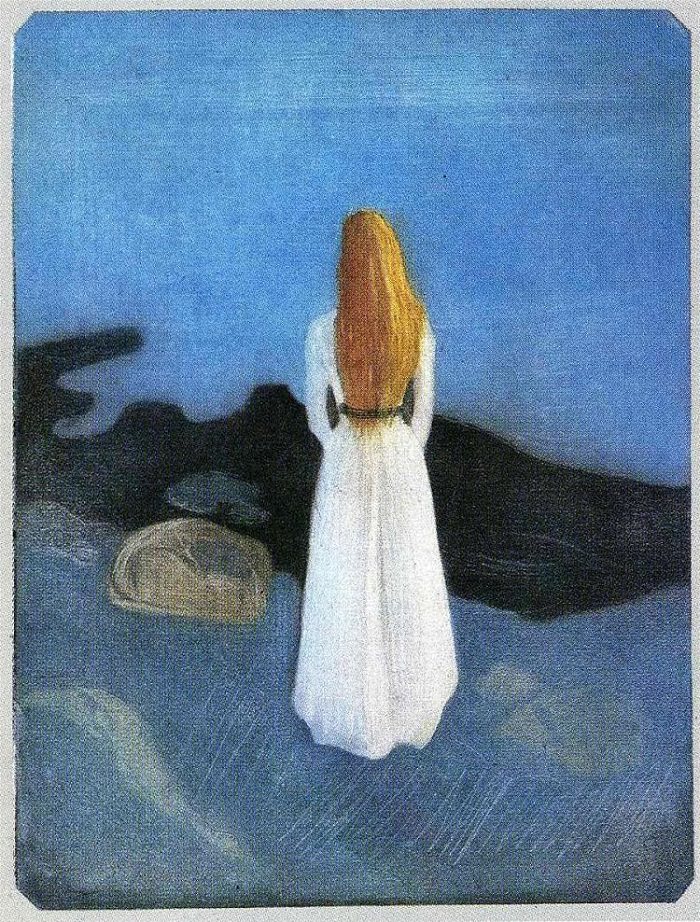 Once upon a time in a land of sand, salt water and warmth, a girl named Ally was born. She grew and became a wispy young girl with flaming red hair; the salt water of the ocean she lived by flowing in her veins. She was a part of the ocean and it was a part of her. Sitting on the warm sand, staring out into the vast blue, her soul was full and at peace.

In the summer other children would come to play. She would splash in the shallows, the tiny waves lapping at her ankles. Together they would build castles and dig great moats that filled with the lovely salt water as the tide came in every night. She loved when friends came to play, but inevitably the winds would change bringing the winter and her beach would grow cold and bare.

Year after year she made new friends, and together they explored the pools filled with sea creatures low tide left behind, fished on the splintery wood of the expansive piers, and warmed their tanned skin lying on the sand. At the turn of the seasons, Ally would watch her friends head inland waving through the back window of their car. She loved life on the warm sand by the ocean, but Ally was lonely.

One day a wild haired, rugged boy found his way onto Ally’s beach. She saw him across the sand, standing with his toes in the gently lapping water as he looked silently out toward the horizon, his hands stuffed in the pockets of his dark jeans rolled up tightly against his calves. Her heart leapt inside her and she felt a thin, silk string tie between their hearts.

Time passed and she learned that this wild boy was from the mountains. Cool, fresh mountain water ran in his veins, while her blood ran mingled with the warm salt water of the Atlantic. She didn’t know how it could run together, (their fresh and salt waters) she only knew she must try. She was enraptured. She felt the tug of the silk string and knew she would follow him anywhere.

So Ally and her wild haired boy moved to a region between the mountains and the beach and he built her a small cottage there. Ally’s heart glowed happy and full in the light of love, but life was strange and confusing here, and she ached for the warmth of the sand and the healing salt water of the ocean.

Years passed and they struggled against the harsh winds that blew across this unfamiliar country. The land was flat and bare with few trees to protect them from the unfriendly clouds that rolled in. The winds tore at the small cabin, rain leaked through the thatch roof and the icy fingers of the wind found it’s way through their walls. Ally’s wild boy built fires in the house to keep them warm, but one day a stray coal rolled from the fire and before they could stop it, their little house had burned to the ground.

Ally and Wild stood in the yard hand in hand, staring at the black remains of their home; harsh, choking smoke rising in great clouds from the rubble. Ally looked up at him, tears streaking her face. It started to rain.

Out of the rain came a devilish twisting cloud that lowered from the heavens,  a great dark finger tearing the soft earth sending dirt flying. Ally and Wild ran to the trees for cover but the dark hand from the sky ripped the sparse trees from the earth, leaving them exposed. As they ran, Ally lost her grip on Wild’s hand and she suddenly found that she was lost.

Terror gripped her heart as she frantically searched for Wild, the light of the sun snuffed out by the smoky sky. Ally ran through the night crying out for her lost love, thorns catching her clothes, ripping her skin as she ran. Her salt water blood trickled down but she didn’t notice. All Ally knew was that she had to keep running, keep hiding under cover until she found a safe place.

Time went by and Ally found her way back to her beach. She stood in the warm, salty water and let her wounds heal and let the thick heat of the sun make its way down deep into her shattered, cold soul. But even though her wounds were healing, things had changed. Her heart ached and she couldn’t find rest. Even her favorite things didn’t bring her joy anymore. She ached for Wild, but she didn’t know how to find him.

2 Replies to “Ally: The story of an ocean girl (part one)”